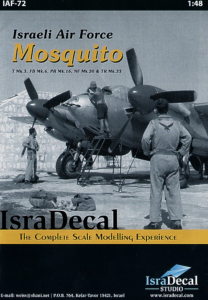 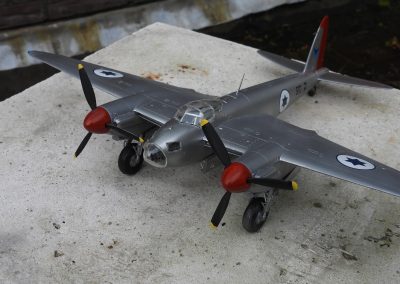 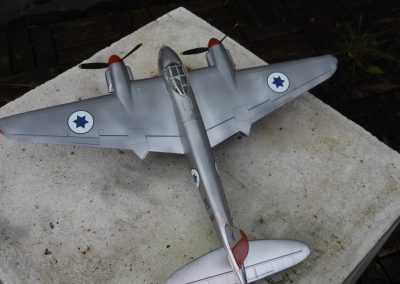 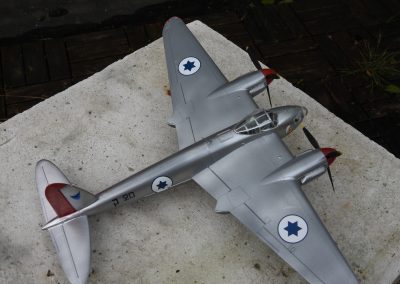 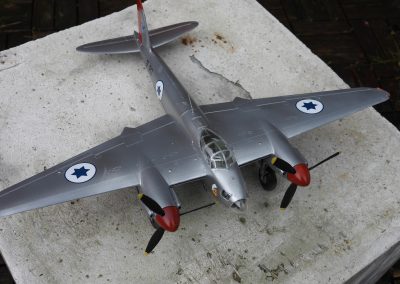 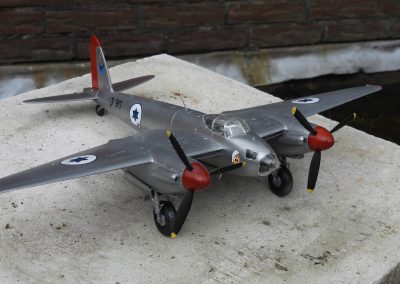 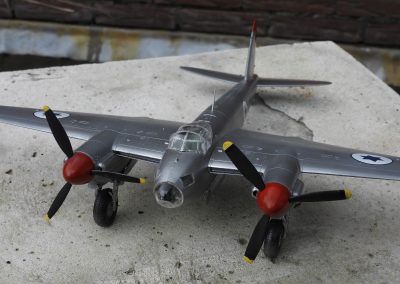 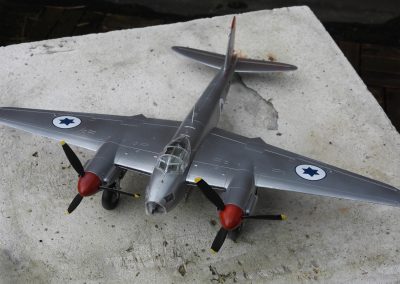 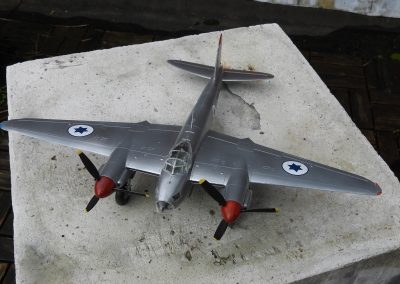 A fighter bomber that served in the IAF in the late 1940’s and early 1950’s. The airplane was intended as a solution for two of the challenges that faced the IAF when the War of Independence ended: the need for ordered organization, and the purchase of combat planes that would meet the IAF’s specific requirements.

True, the Spitfire and Mustang were already in the IAF’s service, but multi-purpose aircraft – that could efficiently carry out attacks against ground targets as well as close support – were still lacking. The IAF needed a plane capable of carrying a relatively heavy bomb load and varied armaments; that could operate at long ranges and was available at a low price. In other words – it needed the Mosquito.

The Mosquito’s operational career in the IAF was less than impressive, but it made a significant contribution to the development of the IAF’s night flying capabilities.

The service at the IAF

Not long after Israel’s War of Independance, a single Mosquito fighter was purchased in Canada, but was lost at sea on its way to Israel.

On February 17th 1951 a contract was signed for the purchase of 59 Mosquitos from France’s military surplus. The planes underwent extensive renovation in France, and only began to arrive in Israel on the 11th of June 1951. The pilots were trained in Swinderby Airbase in Britain, the Mosquito’s country of origin, and were then incorporated into the IAF’s first Mosquito Squadron. The Squadron was composed of 3 groups: Operations, Instruction and Photo-reconnaissance.

The Squadron’s officially defined duties included attack missions, as well as support of ground troops in both day- and night-time operations. The planes were flown on numerous training flights, including simulated air battle with Spitfires and Mustangs.

In 1953, Hugo Marom was appointed to set up the IAF’s first night-fighting squadron. The squadron operated from Hatzor Airbase, and the Mosquitos initially formed a part of the Photo-reconnaissance Group. Later on, they formed part of a separate squadron created especially for this purpose, which included other photo-recon planes.

Although the Mosquito proved to be a hard plane to fly and maintain, and was involved in accidents, it was considered valuable in terms of attack performance and bomb load capability.

In the early 1950’s, the first jet planes were incorporated into the IAF, and it was decided to dismantle the Mosquito Squadron. A short time before the Sinai Campaign the Squadron was re-established and the pilots underwent refresher courses and renewed flight training. During the fighting, the Mosquito carried out attacks on convoys and armored forces, using bombs, rockets, and strafing by cannon.

The plane’s primary target was Sharm a-Sheikh, which was attacked on four consecutive days. A fortnight after the Sinai Campaign ended, the squadron was permanently dismantled, and the story of the Mosquito’s service in the IAF came to a close.

Developing the Mosquito was an independent initiative of the British company De Havilland, which believed there was a need for a fast, unarmed bomber that would utilize its high speed (over 600 kph) for defending itself against hostile fighters. This was in complete contrast to the views widely held in the Air Ministry and the RAF, which favored heavy bombers armed with a large number of machine guns for self-defense. De Havilland proceeded to develop the Mosquito on its own, beginning in the summer of 1938. The plane was made of wood, since Britain suffered from a shortage of expensive strategic materials. An additional factor in the choice of material was the company’s previous experience in building wooden planes.

All in all, 7,781 Mosquitos were built, in different models: fighter, bomber, night-fighter, surveillance and photo-reconnaissance, and advanced training.